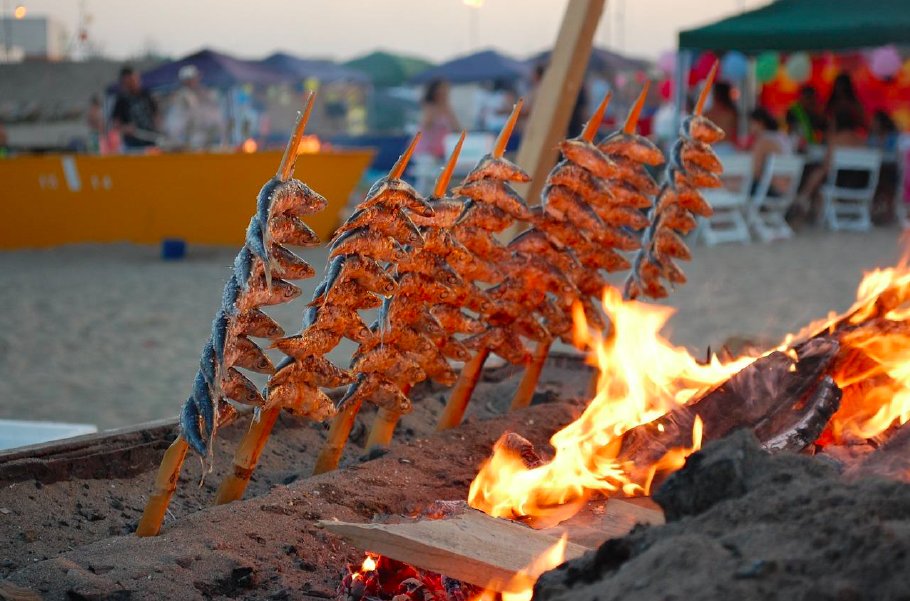 The art of vertical wood-fired grilling
By Luis Soto Villalta.

The oldest spit-grilled fish images are in some Egyptian burial chambers. This type of grilling possible was also done in other ancient Mediterranean civilizations. Typical Turkish and Greek vertical roasts as gyros and kebab are proof of this.

The espetos tradition in southern Spain dates to the Muslim era when Muslims brought this type of grilling from the Near East. The cause was the Islam spread and the invasion of the Iberian Peninsula.

This grilling method passed from home cooking to professional cooking in the 19th century. It was by the hand of Miguel Martínez Soler when in 1882 he opened his famous bar on the beach: “La gran parada ”. It would be the first beach bar “chiringuito” in the Costa del Sol. Miguel was who started to spike sardines on a piece of cane sinking it on the sand next to the fire. The fame of his espetos spread quickly and on January 21st, 1885, the King of Spain Alfonso XII visited the bar. On Miguel’s advice, he ate sardines with his hands, without knife and fork.

Nowadays, people grill in espetos other species of fish as well as squid and cuttlefish.

How to Prepare a Traditional “Espeto” with Sardines

Then cut ends of each cane in the shape of a spear tip.

Finally, reduce about 20 cm of cane at the opposite end, which is sunk into the sand, from 2.5 cm to 1.5 cm diameter.

Season the sardines with coarse salt a couple of hours before roasting.

Thread sardines in a row, all in the same head-to-tail direction to make the grilling uniform.

Cross each sardine from back to belly in half its length. The cane rounded outside must run along the sardine spine and be perpendicular to it.

The sardines must have their back down and their belly up.

Thread the thicker sardine at the bottom of the espeto and the thinner one at the top. When you sink in the sand first, the cane rounded outside faces the fire.

The olive tree is the best firewood for the espeto. This is because of its resistance, heat power and plenty in Andalusia. The oak wood could be used in other countries where there are not olive trees.

Light the fire and wait until the wood becomes embers.

Once you have threaded the sardines, sink the espetos into a small mound of sand. 20- 25 cm from the fire, a little inclined in the direction of the breeze.

The espetos must receive the heat and not the smoke. The flame must never meet the fish.

Grilling ends after 10-12 minutes facing the fire. 5-6 minutes every side.

Remove the espetos from the sand and placed on a dish. You must hold each espeto

with one hand and disengages the sardines with the other hand by a slight twist. Serve with some bread and sliced lemon. You can also serve with lettuce. The eatable weight of a sardine in espeto is half of its raw weight.