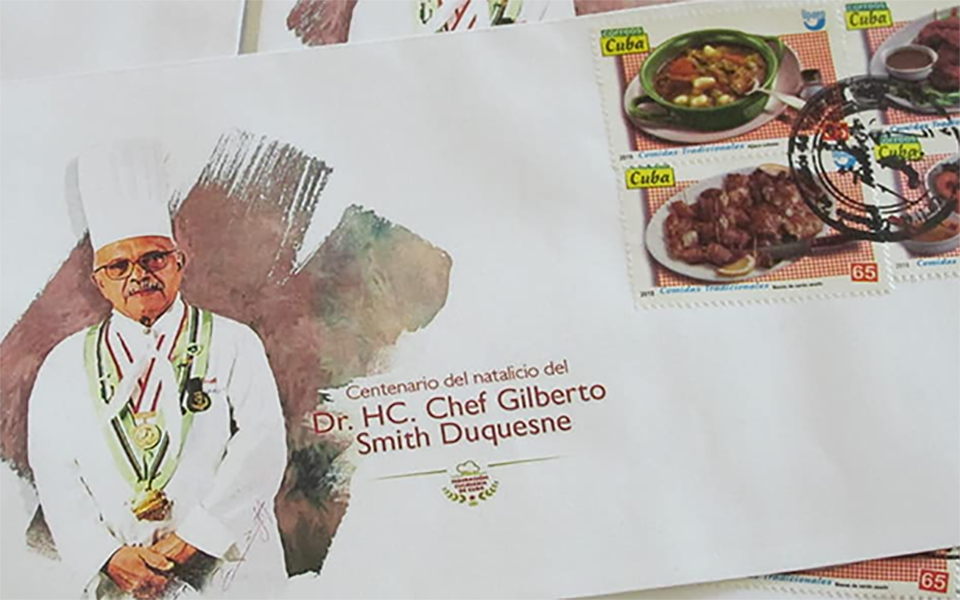 Worldchefs President Thomas Gugler and the Board of Directors would like to take this opportunity to share a special memorial letter and recognize the centenary of Honorary Life Member, the Late Dr. H.C. Chef Gilberto Smith Duquesne, who was instrumental for the expansion of Worldchefs into Cuba and throughout Latin America.

Well known for his passion towards global culinary friendship, the culinary profession and his Cuban heritage, the Late Dr. H.C. Chef Gilberto Smith Duquesne took great pride in showcasing Cuban lobsters and promoting traditional Cuban Cuisine all over the world.

As a tribute to the life of Dr. H.C. Chef Gilberto Smith Duquesne and in recognition of his birth on December 31, 1920, a 100 year commemorative postcard was created and presented by the Minister of Mincin, Vice Mayor of Communications, the President of Cuba Post and the Federation of Culinary Associations of the Republic of Cuba.

Memories of My Father, Dr. H.C. Chef Gilberto Smith Duquesne, Lifetime President of the Federation of Culinary Associations of the Republic of Cuba

First of all, I would like to take the opportunity to thank Worldchefs President Thomas Gugler for his support and for taking the time to be a key player in this 100 year celebration of my late father’s birth centenary.

As you well know, my father had quite a history himself. He was Meyer Lansky’s personal chef in the 1950s before Cuban President Fidel Castro came to power and the late Mafia boss left Cuba for good. My father was Cuba’s answer to a celebrity chef: tagged ‘The Lobster King’ for his expertise with crustacea.

It was in Paris in the late 60s and for seven years, he studied at  L’Académie Culinaire de France, becoming the first – AfroLatino descendent – member of this prestigious culinary organisation. Since then, his very personal dream was to create a Federation of Culinary Associations in Cuba.

As you know, in 2017 Chef Cornelia Volino, Worldchefs Secretary General visited Havana. On the occasion, Chef Volino recognised Cuba’s role in Worldchefs as the first Latin American country to join Worldchefs, over 40 years ago through the efforts of my late father, when he helped  the Federation of Culinary Associations of the Republic of Cuba (FACRC) join your organisation.

On two separate occasions at the Olympics – IKA – Olympiade der Köche, my father won a Gold Medal. First in 1980, when in representation of his country, he attended alone the IKA. The second medal was won in 1984, when he went to IKA, leading a team of Cuban Chefs.

Since then, on October 18, we celebrate the Day of Cuban Cuisine. The date is celebrated as homage to that team of Cuban Chefs,  the “Day of Cuban Cuisine” was launched on world markets at “Culinary 98”, an International event of the Federation of Culinary Associations of the Republic of Cuba (FACRC).