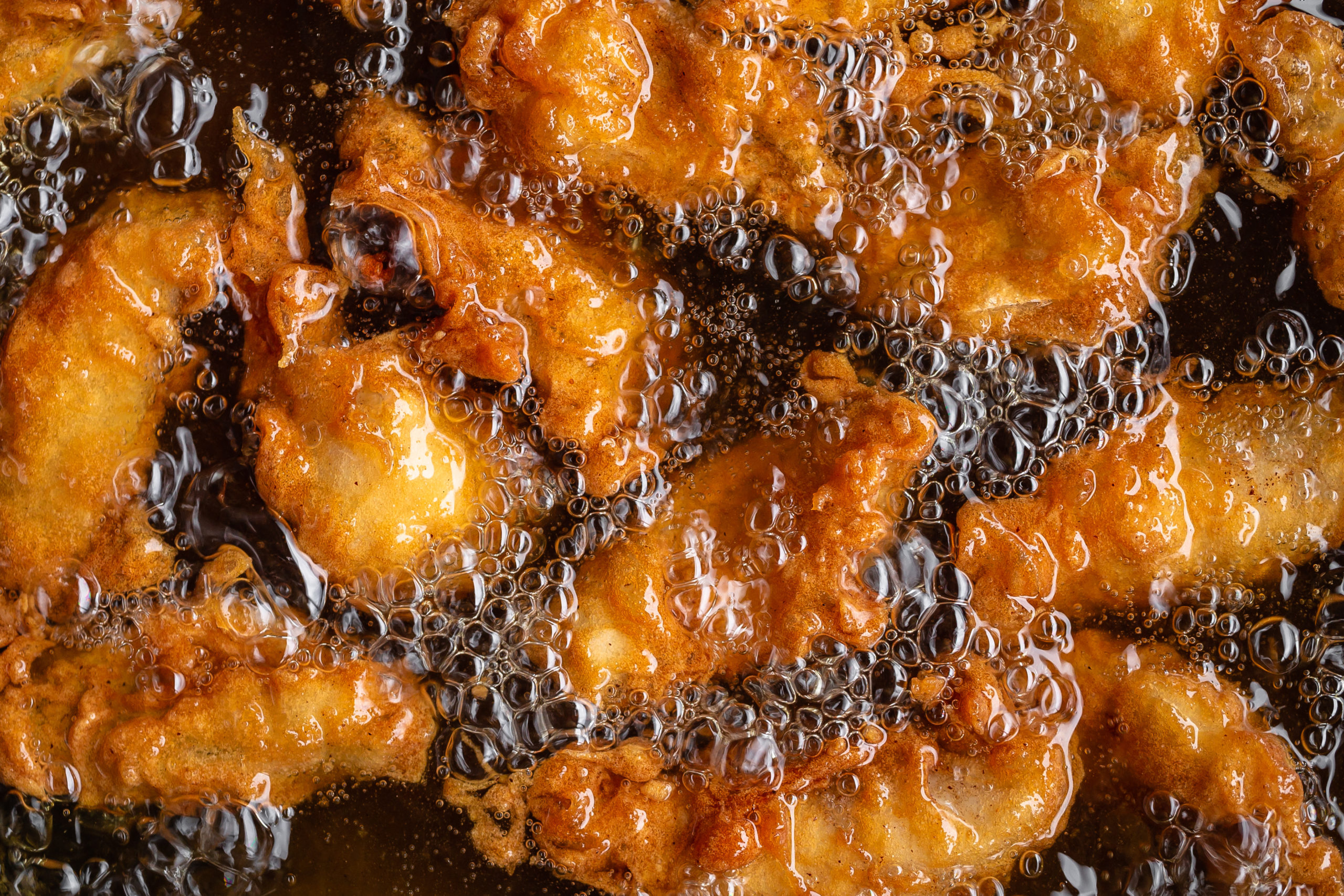 Don’t we just love deep-fried foods? We can hardly resist the distinct aromas, flavors, and mouthfeel of deep-fried foods, luring us with their golden color and crispy texture. Just envisioning a crispy fried chicken or a fried mantou bread can make your mouth water. But did you know that the frying oil used to fry these foods play a significant role in producing the desired end results? In this article, between soybean, sunflower, and palm oil, let’s find out which of these is the best for deep-frying.

What happens during deep-frying?

Deep-frying is often described as heating of food at 150 – 190oC in an oil immersion.  During deep-frying, the frying oils undergo physical and chemical changes due to the presence of oxygen and moisture. Reactions such as hydrolysis, oxidation, ring formation and polymerization take place during deep-frying1. As a result of these reactions, the degradation of the frying oil takes place. The degradation of the oil hinges on its fatty acid composition. As shown in Figure 1, the stability of the oils that contain higher amount of polyunsaturated fatty acids such as soybean and sunflower oil, degrade faster than palm oil. While palm oil contains only 10% polyunsaturated fatty acids, soybean and sunflower contains 61% and 62% respectively2. Unlike polyunsaturated oils, palm oil contains less linolenic acid which is highly susceptible to oxidation during frying. For polyunsaturated oils to be used for deep frying, these oils need to undergo partial hydrogenation to increase the oils’ stability, which is unfortunately harmful as it causes the formation of trans fatty acids. Today, oils with lower stability such as sunflower and soybean are commonly blended with palm oil to gain higher melting point for better frying application.

Yes it is – to a certain level. Many households and industrial kitchens are accustomed to repeated frying to ensure cost effectiveness3. After one frying session, sometimes the oil we use is too ‘fresh’ to be wasted away. However, reheating vegetable oil at a high temperature leads to the production of rancid odor and flavor due to oxidation. Hydroperoxides and aldehydes are formed and are absorbed by food and eventually enter our system after ingestion.  These have been indicated as potentially harmful components in our diets.

According to the American Oil Chemists’ Society (AOCS)4, the maximum allowable peroxide value for edible oils is 10 meq/kg oil. A study5 (Figure 2) has shown that after heating five times, the peroxide value of soybean oil, sunflower oil, and palm oil are 10.88 meq/kg oil, 8.42 meq/kg oil, and 6.01 meq/kg oil respectively. Clearly, the level of peroxide value in soybean oil exceeds the allowable value stipulated by AOCS, while the other two remains within the threshold. Higher peroxide value indicates lower chemical stability of the oil during frying. This clearly shows that palm oil is most stable among all.  As mentioned before, due to higher level of PUFA, these oils have lower stability as PUFA contain double bonds6, which are reactive in the presence of oxygen. Peroxide value indicates the presence of lipid hydroperoxides which in the body, can decompose into free radicals that can oxidize other unsaturated fatty acids and form compounds that are potentially toxic to one’s health7.

“Tocotrienols, which are abundantly found in palm oil, was found to exhibit higher antioxidant ability than tocopherol, which are found in other oils such as sunflower and soybean oil.”

Fortunately, antioxidants in vegetable oil provide natural resistance to oxidation4. Palm oil, processed or unprocessed, is rich in tocopherols and tocotrienols (vitamin E). Vitamin E is an important antioxidant, which helps combat chronic disease8. The primary role of vitamin E is to prevent the oxidation of fatty acids in oils by free radicals. It is the presence of tocopherols and tocotrienols in palm oil that provide better oxidative stability during frying. Based on these observations, in this comparison, palm oil emerges as the more stable oil for deep-frying and is much safer for repeated frying with less potential to produce toxicity in humans.