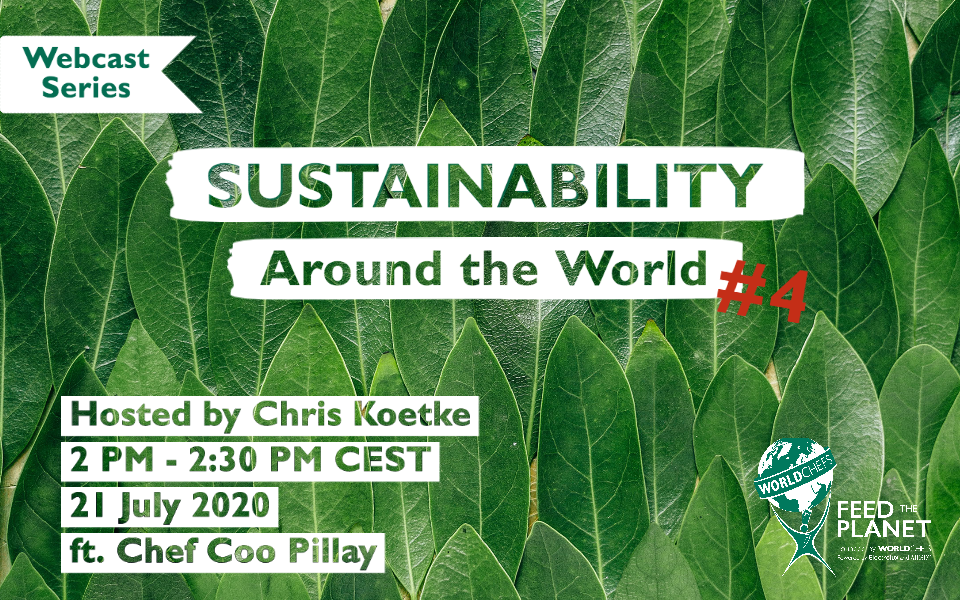 On this episode of Worldchefs’ webcast series Sustainability Around the World, Feed the Planet’s Chris Koetke talks with Chef Coovashan (Coo) Pillay, National Project Manager for Chefs with Compassion. A non-profit founded in response to the humanitarian crisis brought about by the COVID-19 pandemic, they are reducing food waste while alleviating hunger and suffering in cities and towns across South Africa.

Chefs with Compassion takes produce that would otherwise have gone to landfill and provides delicious, nourishing meals through the skills and compassion of a network of chefs in centres around the country, by leveraging relationships with farmers, agents, markets, retailers, wholesalers, producers, manufacturers and organisations.

Discover how Chef Coo and his team at Chefs with Compassion are transforming surplus rescued produce into wholesome and nutritious meals for those in need.

Chef Coovashan (Coo) Pillay is a “proud son of the soil.” Brought up on a farm in Northern KwaZulu-Natal, a deep respect for the earth was nurtured from a long age. His father’s shadow on the farm, his exposure to growing fresh produce translated into a love of cooking. He swapped a career in commerce for chef whites, graduating from the International Hotel School and training with the Three Cities Group under the guidance of former Group Executive Chef Shaun Munro.

Over the course of his career Chef Coo has worked with groups such as Three Cities, Signature Life Hotels, Intercontinental Hotel Group and currently with Marriott International as Executive Chef of Protea Hotel by Marriott O.R. Tambo Airport. He also serves as the Chairman of the Group’s Food and Beverage Forum, representing Southern Africa as the Advisory Chef for Marriott’s Middle East and Africa region and have recently been appointed as an Advisory Board member of the International Hotel School. And last but not least, he’s a culinary competition competitor and judge.

Chef Coo is also an advocate for the next generation of chefs. He’s brought a commitment to helping young chefs grow to each organisation he’s worked with, and in 2018 was awarded for the Best Performing Workplace across all 3 levels of the NYCTP program in Gauteng.

As Director of SA Chefs, he’s taken on the Youth Portfolio, with a focus on establishing Young Chefs Clubs in all the major regions of South Africa. From advocating for mentorship programs with culinary schools to planning events, he’s working to help develop the future of our industry.

For more on the South African Chefs Association, visit sachefs.co.za.