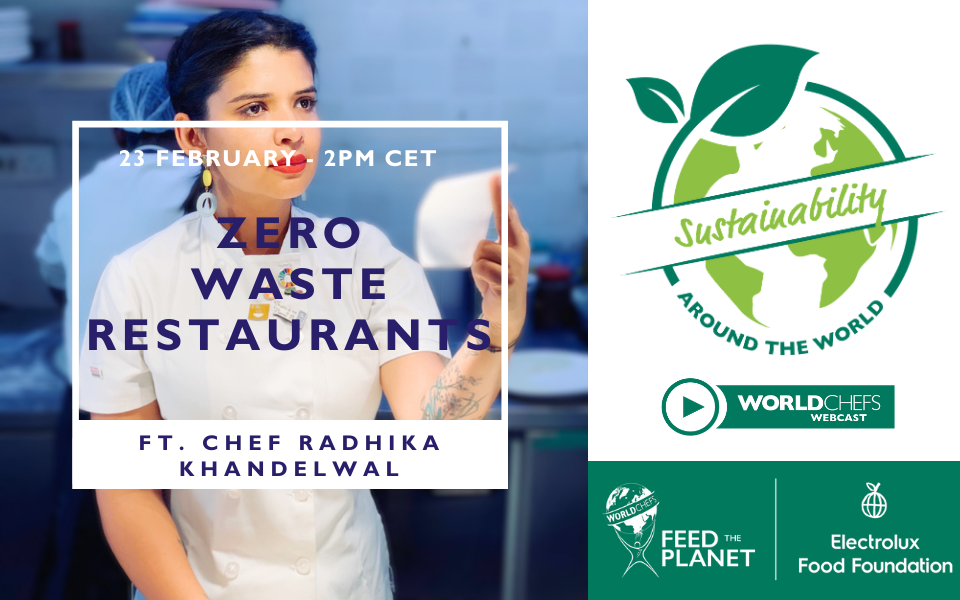 This episode of Sustainability Around the World featuring Chef Radhika Khandelwal looks into the creative application of zero-waste and biodiversity movements at two restaurants – Ivy & Bean and Fig & Maple.

By curating plant-based menus, using excess produce, prioritizing local seasonal ingredients, and cooking from root to shoot, Chef Radhika is a front line zero-waste hero in India. Through her story, discover the know-hows of balancing between creating benefits and being environmentally responsible as foodservice operators.

In 30 minutes, we’ll walk you through the motivation, the rewards, and the challenges of running sustainable foodservice operations, especially during the post-Covid era.

Join Chef Chris Koetke and Chef Radhika Khandelwal to continue your journey towards a more secure food future and to learn how you can contribute by using the power of the white chef jacket.

Radhika Khandelwal moved to Melbourne, Australia at the age of 17 to pursue a degree in Psychology. She began working at a fine dining restaurant to support herself, and sparked a passion for cooking. When she returned to India in 2013, she founded Radish Hospitality, an umbrella company for her restaurants Ivy and Bean (founded 2013) and Fig and Maple (founded 2016). Fig and Maple was founded as a canvas to showcase the vast indigenous biodiversity of India by using local, seasonal, and lesser known ingredients. The arrival of Fig and Maple in Delhi marked the beginning of a new movement in sustainability and was quickly adopted across the city by numerous chefs.

As an advocate of sustainability and a member of the Chef’s Manifesto working to fulfil the objectives of SDG2 (Zero Hunger), Khandelwal launched a 45-day long campaign titled “Be a #ZeroWasteHero”. This campaign raised awareness of issues such as hunger, biodiversity, climate change, and food waste. Radhika – as a Chef and as a food security activist – has spoken and represented India at the the World Economic Forum and the 75th UN General Assembly and has been featured in eminent publications like Salty Magazine, Vogue India, Condé Nast Traveller, The Economic Times, GQ India, The New York Times, Verve, The Hindu, Lifestyle Asia, Indian Express, and many more.

Sustainability Around the World is part of our Feed the Planet initiative, inspiring sustainable food consumption among communities and culinary professionals. Find out how you can get involved at www.howtofeedtheplanet.com.