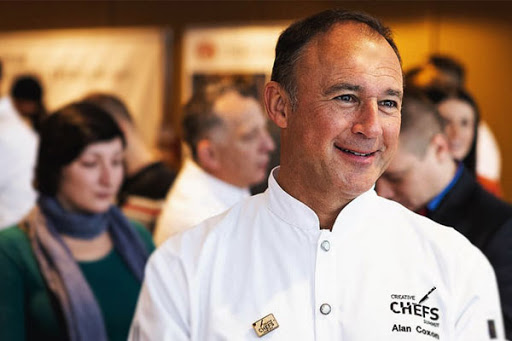 Chef Alan cut his teeth at 18, working alongside a brigade of 68 chefs at the famous Loews Hotel Monte Carlo. An attentive upstart, he quickly rose in the ranks of the Michelin starred Foie Gras restaurant. His 40 years of experience in the kitchen have taken him around the globe, from opening Euro Disney Paris to a star-studded banquet of 10,000 guests, to his own critic-praised restaurant in the Isle of Man.

Coxon took his sense of urgency and ingenuity out of the kitchen and onto the screen. His first TV role was demanding. “We did four shows a day, seven days a week, 36 shows without a break. We changed the audience twice a day. We moved them around twice a show so it looked like a different audience. And I changed my shirt four times to make it look like a new program,” he describes.

For Alan, the pressures of the kitchen were powerful assets in transitioning to TV. Having been well-versed in quick thinking, seamlessly resolving issues on camera came naturally. For ambitious chefs, “they need knowledge, skills, experience, because then you can have the confidence to face the cameras, to work in any environment that will be thrown at you, and have the confidence and ability to get out whatever situation you may be in,” says Coxon.

With over 1,250 TV food and travel shows screened in more than 89 countries around the world, Coxon’s TV accolades not only paid off in celebrity; it also gave him the opportunity to indulge and share his passion for the history of food.

A self-proclaimed food archaeologist, this chef turned presenter is taking the research of food anthropologists to the masses. Using his skills as a storyteller, Coxon is interpreting the fascinating social science through the lens of a chef, rediscovering long-forgotten recipes and bringing them to today’s taste buds.

Alan’s interest in the origins of what we consume was driven by his time as an educator. After taking a step back from the grueling task of Head Chef at the Newport Bay Hotel in Paris, the largest 4-star hotel in Europe, Alan returned to the UK to train young people entering the catering industry. He wanted to engage his students within a story. He found that his class was captivated by the history and cultural current of common ingredients. “Take them on the journey with you, get them passionate about that courgette, or that cucumber, whatever it may be, because to them when the first come in, it’s just a courgette, just a cucumber. No, it has a birthplace, it has a journey, it has a story,” says Coxon.

This would become a defining moment for Coxon. It wasn’t just his catering students who were inspired by visions of emperors’ ancient gardens. The whole world was hungry for food history. One of Alan’s most popular programs, “Ever Wondered About Food” on BBC2, attracted over 1.3 million viewers per episode.

In talking about the origins of food, another stem began to emerge that would deliver him back to the kitchen.

“This old word started to fascinate me. I thought, what does that taste like? As a chef, I thought – We haven’t got Ale Gar anymore. It’s disappeared. Why has it disappeared?”

When Alan came across the word “Ale Gar” it was a point of interest. The meaning of the word was simple: Ale, from beer, and Gar, from aigre, the French word for sour. Swap the beer for wine, or vin in French, and you’re sure to recognize its cousin: vinegar.

Alan set out to recreate the lost flavor of Ale Gar using a 15th century recipe that was recorded to have been consumed by the pint by Queen Elizabeth the 1st. And since even the word “Ale Gar” hadn’t been used for more than 300 years, Coxon was able to copyright it.

It took Alan 10 years to get it right; 10 years to put the flavors of ancient Greek temples, Roman emperors and medieval knights back on the table. Meanwhile in his modern day reality, the economy was in a recession. It had been 10 years of financial investment, too, and now that the product was ready to go to market, the market wasn’t ready for the product.

With grocery stores delisting vinegars, Coxon had to find a new approach. He began doing demonstrations in stores and at trade shows. With the customers right in front of him, he began to note observations on how people enjoyed his products.

Profiling his customers, he saw trends in consumer preferences, most notably between men and women. Women seemed to gravitate towards the more light, floral Greek vinegar. The French, male or female, would go for the Roman. Coxon, intrigued, began to read up on the sexology of taste.

“How many times have we looked through that circular window of the kitchen or stood in a restaurant and watched consumers dine, how they dine, what they do? Right down from sitting down and the plate come – everyone looks at each other’s plate. They do an automatic comparison to what they’ve chosen and you can see in their heads, ‘Have I chosen the right dish? Their’s looked better than mine.’ There’s a lot going on without a word being spoken.”

The question of whether men and women experience taste differently is an interesting one. Science shows genetics does have an impact on this key sensory experience. Pioneering research conducted by Dr. Linda Bartoshuk, an international leader in taste research, suggests that women have more taste buds on their tongues than men. Women are also more likely to be “supertasters,” a term coined by Bartoshuk.

So what does that mean, and what is a supertaster? The human tongue is wrapped in fungiform papillae – taste buds. Research suggests that supertasters have more taste buds, and carry a special gene that makes these receptors more sensitive to bitter flavors. Salt helps mask bitterness, so supertasters may be more likely to reach for the shaker on the table to alleviate this sensitivity.

Based on research conducted in the United States, Bartoshuk estimates that the label “supertaster” applies to 35 percent of women and 15 percent of men in the US. According to the National Institute on Deafness and Other Communication Disorders, approximately 25 percent of Americans are nontasters, 50 percent are medium tasters, and 25 percent are supertasters.

You don’t need to be a geneticist or an anthropologist to make basic assumptions about why women may have evolved with a stronger sense of taste and smell. From an evolutionary standpoint, their role in carrying and protecting offspring necessitated more developed tasting tools. Our female ancestors gathered plant-based foods, and needed the skills to discriminate between poisonous and nonpoisonous, fresh or foul.

Interestingly, women are also better at determining the differences in tastes, and even better at describing how things taste. While professional kitchens may still be male dominated, the disparity of female leadership doesn’t extend to homelife, with matriarchs across many cultures historically being the key conduits for a family’s relationship to food.

Coxon suggests a prospect where your genetics could play a central role in what you eat, and how you shop. “Everything has got a sex – male, female – except when we get to the food aisles,” says Coxon. He’d like to see scientists develop a way to customize that experience.

“In Alan’s dream of the future, you’d walk into a supermarket. There you take a little litmus test. Take it out to this hygienic wrapper, put it in your mouth, see which color – pink, blue, green, whatever it may be. And there you’ll be profiled into taster, supertaster, nontaster. Readymade meals, chilled meals, ambient meals, ingredients, and each one of those would be labeled in accordance of pink, blue, or green, which was specific to that particular litmus test which you’ve just taken. And so you can then start to buy meals for one which are in accordance with your taste profile.”

Is this concept problematic? Any woman who shops in a grocery store should be aware of the “pink tax” and the idea of a future where food is gendered seems immediately concerning. At its best, this imagined future would yield recipes specifically designed to stimulate an individual’s palette. At its worst, it could perpetuate arbitrary gender pricing and price discrimination.

But regardless of what the capitalists may make of such a scientific breakthrough, there’s no doubt that the genetics of taste can yield new discoveries that will benefit both women and men.

This pursuit isn’t just in the hands of scientists, but in the education of chefs, too.

Interested in taste and social sciences? Check out this article on Taste as a Social Sense.

For information on food and  archaeology, check out What Is Food, and Why Do Archaeologists Study It? Looking for something more hands-on? Have a look at Dig in! Archaeologists serve up ancient menus for modern tables.

Is being a supertaster not-so-super? Want to learn more about super-tasters, non-tasters, and the origins of taste? Check out this article from the Harvard School of Public Health: Super-Tasters and Non-Tasters: Is it Better to Be Average?

Interested in Ragnar’s wine connection and want to know more about how this applies to the beverage industry? Read NPR’s Are Women Better Tasters Than Men?

Find out if you’re a supertaster! Test your tongue with this experiment from the Scientifc American here.

Special thanks to Alan Coxon for joining us as a guest.